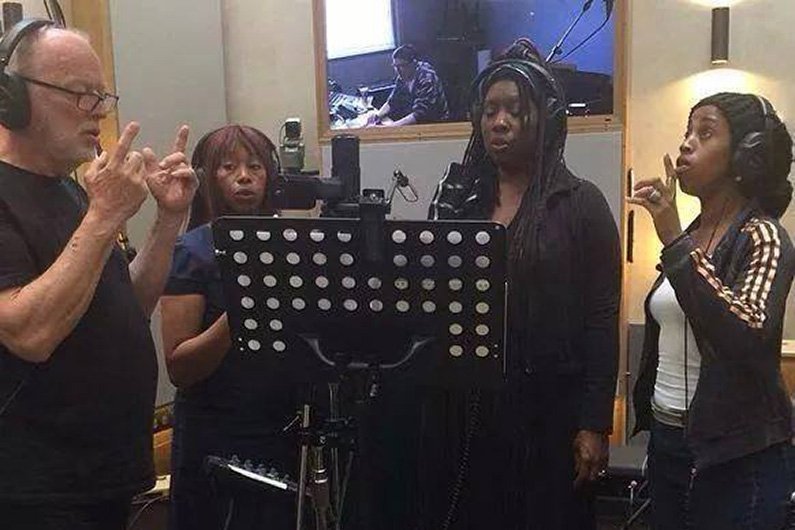 After the death of keyboardist Richard Wright in 2008, most Pink Floyd fans gave up on the possibility of another album or tour from the legendary group. That was, until David Gilmour's wife Polly Samson sent the following tweet:

Btw Pink Floyd album out in October is called "The Endless River". Based on 1994 sessions is Rick Wright's swansong and very beautiful.

Samson is an author in her own right who actually co-wrote 7 of the 11 songs on The Division Bell (released in 1994), which to this point is Pink Floyd's last official studio album.

Vocalist Durga McBroom-Hudson confirmed the album's production by sharing this picture on Facebook of a vocal session with Gilmour:

She had added other information that has since been removed:

The recording did start during The Division Bell sessions (and yes, it was the side project originally titled "The Big Spliff" that Nick Mason spoke about). Which is why there are Richard Wright tracks on it. But David and Nick have gone in and done a lot more since then. It was originally to be a completely instrumental recording, but I came in last December and sang on a few tracks. David then expanded on my backing vocals and has done a lead on at least one of them. That's the song you see being worked on in the photo.

The social media leaks set the table for Pink floyd to make an official announcement on their official website:

Pink Floyd can confirm that they are releasing a new album, The Endless River, in October 2014. It is an album of mainly ambient and instrumental music based on the 1993/4 Division Bell sessions. The album is produced by David Gilmour with Phil Manzanera, Youth and recording engineer Andy Jackson. Work is still in progress, but more details to come at the end of the summer.

It's worth noting that The Division Bell is the only Pink Floyd album that was made without founding member Roger Waters, who had been a hugely important member of the band as a bassist, singer, and songwriter.

Waters left the group in 1985, and recently was quoted as saying he was sorry for taking legal action against the rest of the band members in an attempt to stop them from using the Pink Floyd name while he pursued a solo career. The four members of Pink Floyd performed together at Live 8 in 2005, and Waters has performed several one-off gigs with individual members since then, but a source close to the album told The Sun that Waters is not involved with the album and there are no plans for a tour.

For Pink Floyd's latest music and news, check out their Zumic artist page.

"Echoes"
Rodrigo y Gabriela (YouTube)
Music Classic Rock Psychedelic Rock Pink Floyd Rodrigo y Gabriela Audio Single
3
613
Back to top
You must be logged in to upvote things.
Registration and login will only work if you allow cookies. Please check your settings and try again.