Though releasing this album under the same label as One Direction, Capitol Records, and opening for the British boy group on tour, 5SOS are evolving past the boy band image they once had. With an edgier sound than their self-titled debut album, Sounds Good Feels Good is full of teenage emotion. This, along with the big melodies and rocking sound, makes their place as a pop punk band legit. What makes this band unique is that they balance the harder '90s punk influences with softer emo and modern pop stylings.

After listening to this album on repeat for the last week, I've come to a realization that my favorite songs are "Vapor" and "The Girl Who Cried Wolf." Both of these songs scream emotion, from the lyrics to the way they are sung. "Vapor" is a song that talks about a love that is craved by the character though it's not a feeling that is reciprocated. In a track-by-track review with Fuse TV, 5 Seconds of Summer's producer John Feldmann described the song's creation:

"Vapor" started with keyboards — we wanted to do this moody, ambient song. I had the root notes written, and I was playing them on bass, and Ashton had that idea for the drum loop in the song. It's very "Tomorrow Never Knows" by the Beatles, that loop that happens in the verse. Simon [Wilcox] and Michael came up with "I want to breathe you in like a vapor," which is so beautiful and dark.

"The Girl Who Cried Wolf" revolves around the theme of needing to be heard. Feldmann elaborated on the song in the same Fuse interview, stating that the creation of it started with him recalling a fight he had with his wife and feeling like he was arguing with a wall. The lines "Look at me in the eye. Is anyone there?" were shouted, and ultimately lead to the birth of a song that teenagers could relate to. Feldmann states Clifford described what he wanted to do "this huge, Radiohead, 32-bar bridge." Feldmann described the single note drowning through as a "Nirvana thing." The bridge is the focal point for the whole song, sung with intensity for the whole minute it goes on for. That is the part that I can admit to replaying three or four times when the track comes up on my playlist.

Other highlights on the album include "She's Kinda Hot," "San Francisco," and "Hey Everybody!" These songs have a sound that make you feel more than good. "She's Kinda Hot" is gritty and has a beat that you can't help but bob your head to. "San Francisco" can be compared to a Mumford and Sons track, it's a different direction from what the band usually does. "It's acoustic and raw" describes a 5SOS engineer, Matt Pauling, in the track-to-track review with Fuse TV. "Hey Everybody!" is the most recent single debuted by the band. It's a bit of an empowerment song insisting that though it's hard now you can and will get through the struggle you're facing.

Sounds Good Feels Good is a great stepping stone to bringing these four Aussie boys in the direction they'd only dreamed of, being one of the most popular bands in the world.

Get your hands on Sounds Good Feels Good through Amazon (CD, MP3). You can also stream the full album above, via Spotify.

For 5 Seconds of Summer's latest music, news, and tour dates, check out their Zumic artist page. 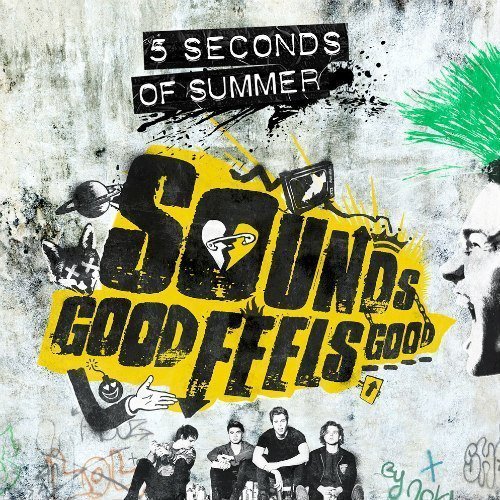