For the second night in a row, John Fogerty appeared on the David Letterman show promoting his new record Wrote A Song For Everyone, and for last night's appearance he was joined by California band Dawes, who also back him on "Someday Never Comes" on the record. Pretty damn cool, right? Taylor Goldsmith actually takes the first verse on the song, which had to be quite a thriller considering who he was sharing vocal duties with. Dawes is very heavily endebted to 60s and 70s rock bands, so the pairing makes perfect sense and the performance reflects that as it's pretty great. Check it out below:

Wrote A Song For Everyone is out May 28th and features guests ranging from My Morning Jacket to Miranda Lambert (who is on a song with Tom Morello, no shit) to Kid Rock. For album ordering info and more, check out Fogerty's website here. 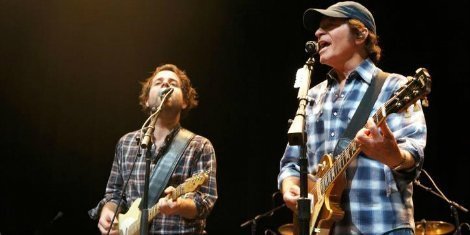 Dawes Extend 2019 Tour Dates: Ticket Presale & On-Sale Info
Tickets Alt Country Folk Rock Dawes
2
2326
Back to top
You must be logged in to upvote things.
Registration and login will only work if you allow cookies. Please check your settings and try again.