Have you ever heard of a theremin? If you haven't, you're definitely not alone. A theremin, thanks to Wikipedia, is an instrument patented in 1928 by a Russian inventor named Léon Theremin that can be played without touching it. Watching someone play it is almost like watching someone play with a marionette or conduct an orchestra, until you hear the electronic, vaguely piano-like noise that comes out of it in time with the player's careful hand movements. Really, it looks a bit like magic.

Now imagine one of those russian dolls that fit inside each other, also known as a Matryoshka or Russian nesting dolls. Good. Now picture a theremin inside of a Matryoshka. You've just pictured, or tried to picture, a very real instrument called a Matryomin.

In China, there are ensembles that play the Matryomin in groups. One such ensemble is called Matryomin ensemble "Da." A video of the group's performance of Beethoven's 9th appeared on NPR today, and watching the 167 members play together simultaneously is quite a site. In this video they play Beethoven's 9th with their own added "boogie," which kicks in around the 1:30 mark.

Watch the full performance above. You can watch more Matryomin videos here. 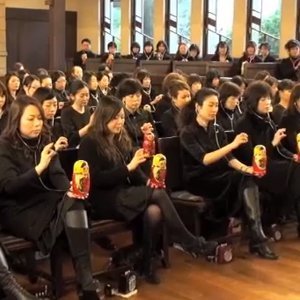