Justin Timberlake debuted the first song off his 2nd album of 2013, which is scheduled to be released on September 30th as the 2nd part of the 20/20 Experience. The video above starts with J.T. showing some cards with dates written on them for his 2013 releases and then he walks into a club. Then it's just a still of the cover image to accompany the 6-and-a-half minute song.

Musically, the Michael Jackson Off The Wall influence shines through in a big way here. J.T.'s vocal lines are mostly in a falsetto range, with strong stuccato delivery, and his ad libs of things like "yeah", "alright", "oh" are right in line with that classic Michael Jackson disco era sound. Plus, lyrics like "Wanna do somethin' right..." quickly bring to mind Michael Jackson's "Wanna be startin' somethin."

"Take Back The Night" isn't a pure Michael Jackson rip-off; its also got Timberlake's signature style, and it's a logical next step after hearing The 20/20 Experience. The new track has the distinct 20/20 horn sound, and the structure here blends Pop / Funky R&B with an extended Disco track with lots of subtle nuance. It's fun dance music, and J.T.'s quirky nature comes through in some other ad libs that sound nothing like no one else. 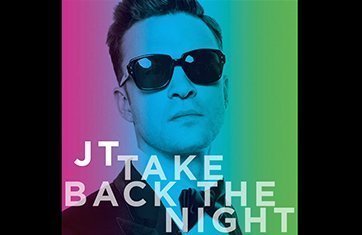 Justin Timberlake Drops Knowledge: 9 Things We Learned During his...
News Justin Timberlake Zane Lowe
2
1191
Back to top
You must be logged in to upvote things.
Registration and login will only work if you allow cookies. Please check your settings and try again.