Despite what most may think upon reading the title of this single, funny-man Mike Epps is quite seriously transitioning into a music career. "That's What She Said" is produced by DJ Funky and features the autotune theatrics of T-Pain. The song is a hip hop ballad which opens with T-Pain crooning to a rhythmic drum melody as he segues into a piano-infused, synthesized chorus pining over the words "that's what she said." Mike Epps comes in strong with his opening line, "First thing that you need to know, Imma treat you right, you're not them other hoes," as he sets the tone for his alto-range rap, playing with different intonations and rhythms. This first release is a strong choice and Epps shows great promise for a rap career.

The balance between T-Pain's melodies and Epps' bassy rap is interesting, and the song could almost be credited as T-Pain ft Mike Epps. T-Pain drives the song and guides Epps into the next stage of his career. Epps has already tried his hand at rapping, creating a comedic video to go with his song "Trying To Be A Gangsta." Let's hope his video release to "That's What She Said" is a little cooler.

There is no word if there will be an album released, but be sure to tune to Epps' official website, Facebook and Twitter accounts for all the details. 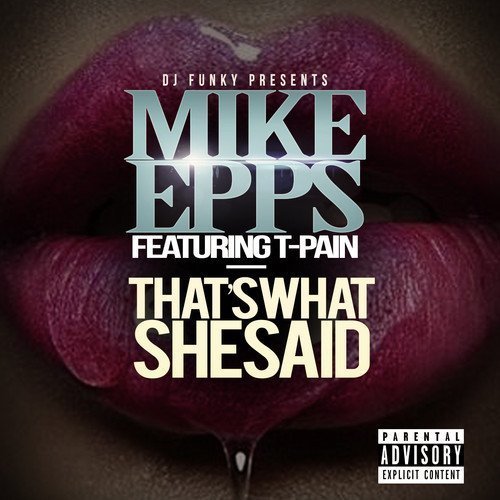