The 13 Worst Music Tattoos Of All Time 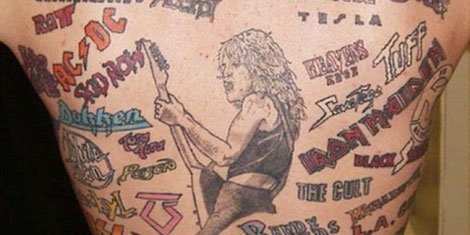 This is the internet, a whimsical world in which the terms 'best' and 'worst' are tossed around flippantly, like so much flotsam and jetsam. If you've been around the internet long enough, you have seen some terrible tattoos, but what makes a tattoo truly horrible?

In order to be considered one of the 13 worst tattoos of all time, it has to be both a terrible idea and a piss poor execution. Statements of such extremes, though, require research, thought, and careful consideration. It is with that degree of gravitas that we present the definitive list of the worst music tattoos ever: 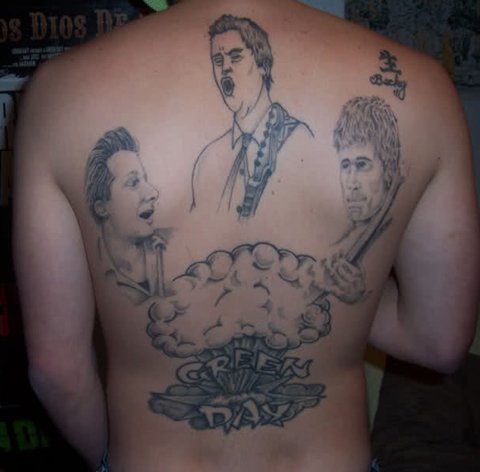 Pop punk definitely reached its pinnacle in the 90s, but Green Day never hit that apex. Instead, after the release of Dookie, they were frozen in time, preserved forever in some dude's back fat. Also of note is the placement of a mushroom cloud not far above the buttocks. Innocent mistake, or genius fart joke? Only this clever devil will ever know. 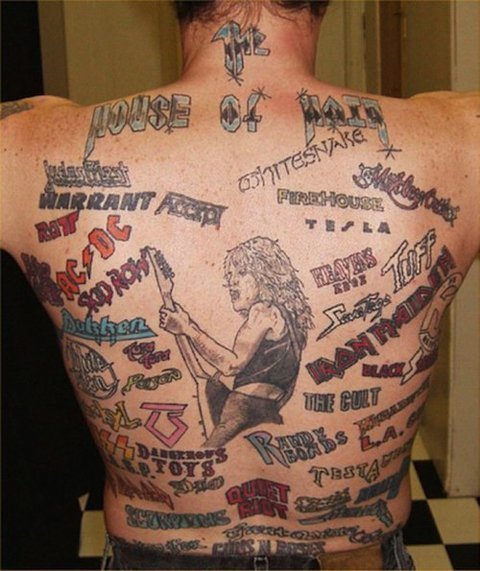 "I just love so many mediocre hair metal bands, I don't know which logo to get inaccurately tattooed on my back. I guess all of 'em. Yeah. Let's just do every cheesedick metal band ever."

"Sounds good, Jeff, but don't you think we should top the whole thing with the phrase "The House Of Pain," so people aren't sure if you named your collection of back tattoos or are just a really big fan of 90s white boy hip-hop?"

"Good call. Phew. That was close." 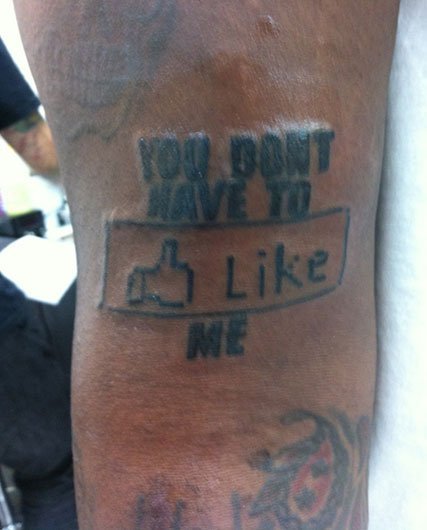 Mr. Pain, I understand the sentiment behind your tattoo. Not everyone has to like you, or your style, or your music. In fact, not all people do. However, social networks tend to ebb and flow a bit more quickly than tattoos fade.

Now, if you'll excuse me, I have to go check my Friendster, Myspace, Livejournal, and Google Plus accounts.

10. What Very Well May Be Axl Rose 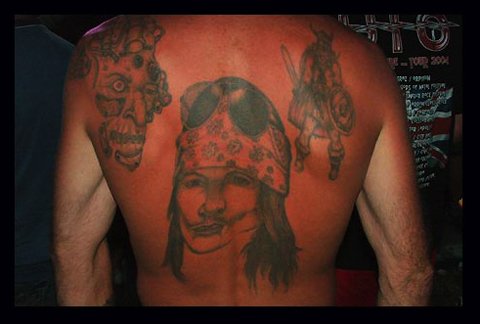 We're actually not quite certain if this tattoo should have made this list. It could just be a photorealistic portrait of a departed loved one who just happened to look like Axl Rose with his cheekbones surgically removed. 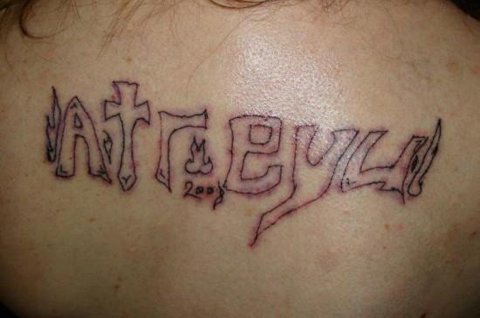 Remember that terrible emo band Atreyu? No? Well, this person does and always will.

Listen, I know you got in a fight with your mom that day and it seemed like Atreyu's lyrics would ring true forever, but having your 16-year-old boyfriend scratch this nightmare into your back after chugging 5 stolen Smirnoff Ices wasn't the answer. 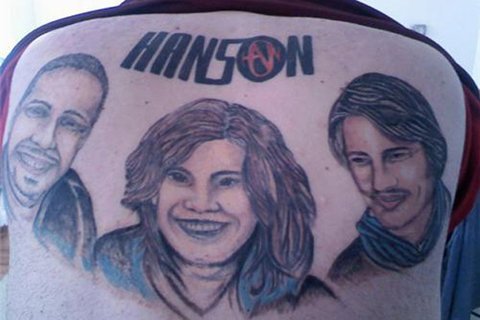 Ok, so we have James Franco on the right, the actress from My Girl in the center, but I'm not sure who the fella on the left is. Oh, that whole monstrosity is a Hanson tattoo? Carry on, then. 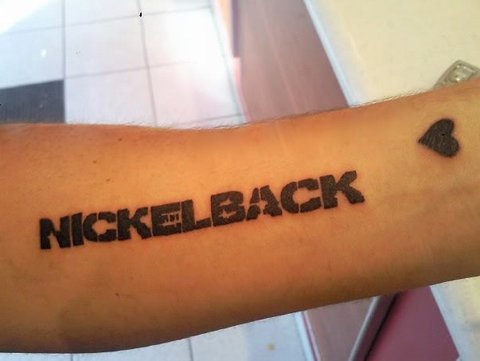 "This tattoo seems passably done," you say to yourself, "Why is this tattoo on the list?" 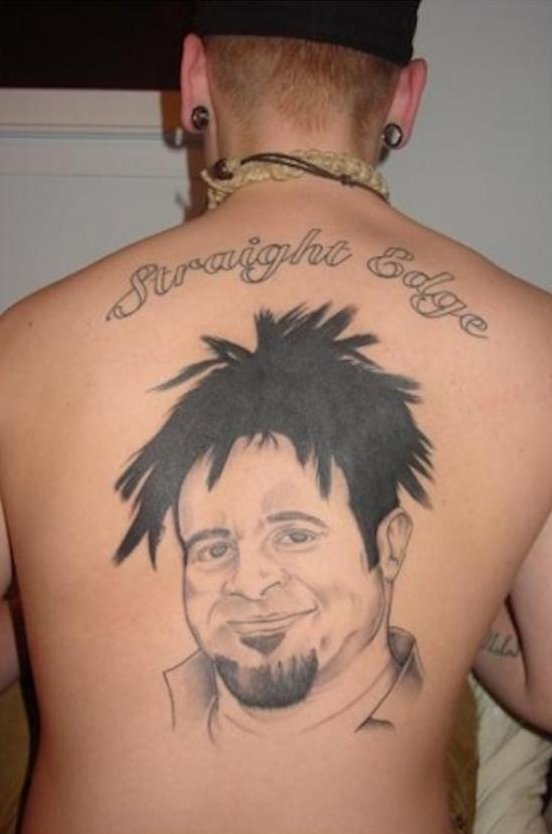 5. What Very Well May Be Angus Young 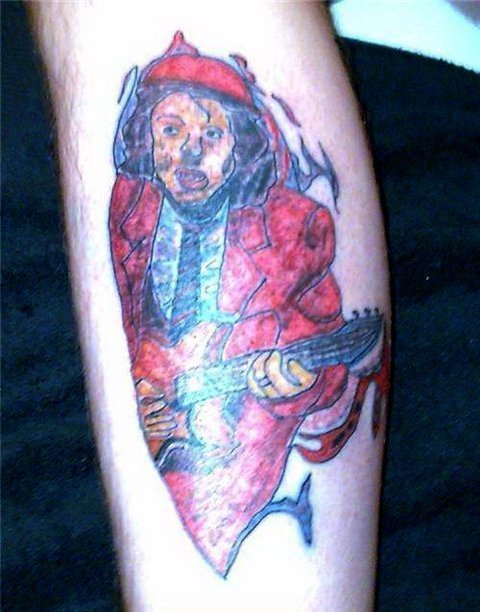 We get it. Your cousin finally landed a tattoo apprenticeship and you really want to support him. But maybe let him start slowly and do pieces closer to his skill level. Otherwise, you're going to wind up with an AC/DC tattoo in which Angus' face looks more like a microwaved marshmallow Peep. 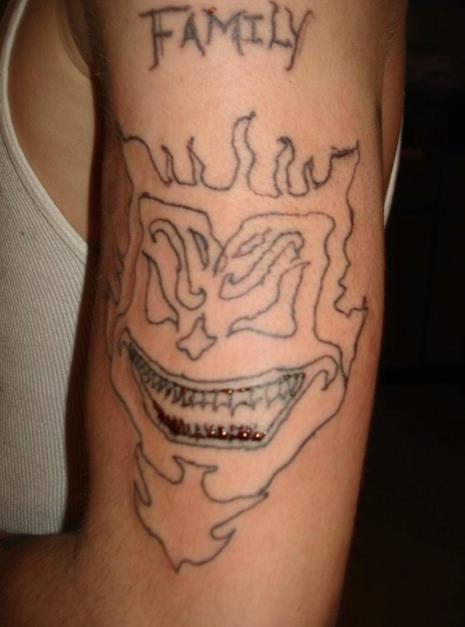 Making fun of Juggalos is a little bit unfair. They get a bad rap. (Get it? Bad rap?) This may be an awful tattoo and terribly done, but at least it's more accurate than most of the tattoos on this list. I mean, Juggalos' gums do bleed a lot. 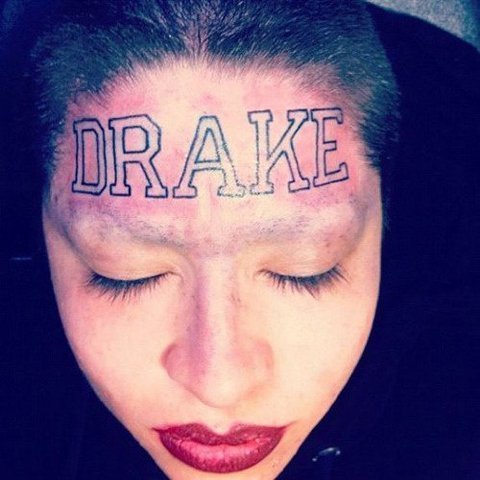 Some poor, misguided soul got this tattoo on her forehead. We honestly feel awful about that. It's a decision with which she'll have to live out the rest of her days. It was probably irresponsible for this tattoo to even have been done and now a human being has a permanent reminder of an adolescence gone awry.

Fortunately, some meta-hilarious hero got this tattoo to make everyone involved feel better: 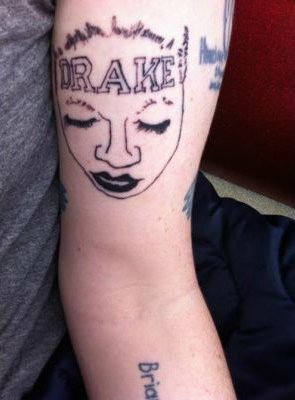 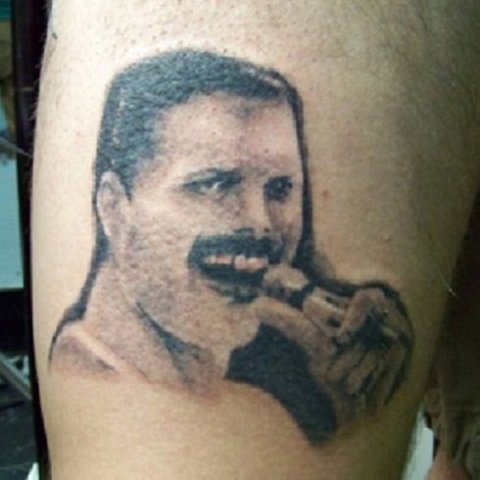 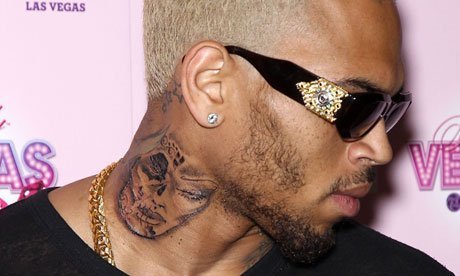 This may seem like an odd #1, but the backstory goes like this: Chris Brown beat up Rihanna, his girlfriend at the time. Then, he got a tattoo of the highly publicized image of the battered singer on his neck. His fucking neck.

Admittedly, this isn't as funny as the rest of the list, but this is officially the worst music tattoo we could find. We tried -- we really did -- but this is just the worst.

I guess congratulations are in order, though. Chris Brown is finally #1 on somebody's list.

If you think we missed any, feel free to let us know on Twitter or Facebook. If it's worse than the above abominations, it's definitely going on the list.