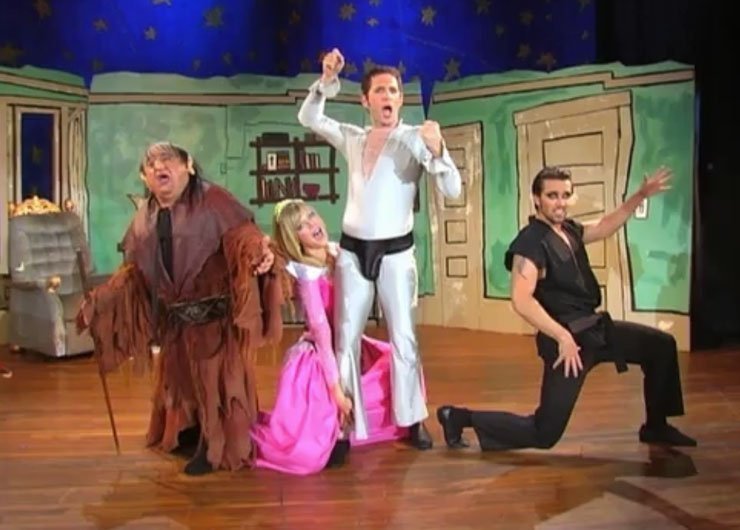 Mac, Dennis, Dee, Frank, and Charlie may be foul miscreants with whom it is unwise to associate -- that's not up for debate -- but did you know that their voices are like those of divine angels? Throughout the history of It's Always Sunny In Philadelphia, the members of the gang have been serenading us with their beautiful odes to whatever cretinous nonsense they've gotten into.

7. "The Trash Song" from The Gang Recycles Their Trash:

When sanitation workers went on strike in Philly, Frank knew collecting garbage would be big business. But you can't collect garbage in a dingy van. No, you must wear tuxedos and chauffeur your refuse around in a limousine. That's the American way.

6."Birds of War" from The Gang Wrestles for the Troops

Give up? It's the theme song. And when you're wrestling for the troops, you need the most bone-crushingly badass song available. Time to break out the "Birds of War."

Dear Abby,
I'm not sure if the person I'm dating is mentally handicapped. What should I do? - Puzzled at Paddy's

Dear Puzzled,
The best strategy is to just come right out and ask them. They'll appreciate your candor, and, if you're lucky, they'll respond to you in song.

4. "I like Paddy's Pub" & "Go Fuck Yourselves" from The Gang Tries Desperately To Win An Award

This one is a two-fer. When the gang decides their bar absolutely must win an award, Charlie Kelly comes to the rescue with a charming, Randy Newman-esque theme song. This song is sacked, however, in favor of Charlie's nightmarish, spray paint-addled barking of "Go Fuck Yourselves."

What's even better than watching the gang turn on the Restaurant Bar Association, though, is the moment you realize the whole episode functions as a meta joke about not winning any awards. Whoa.

The Nightman Cometh, Charlie's long-awaited musical, is the singular culmination of his unbridled genius. It's got trolls, tolls, boys, souls, and a plethora of spectacular songs. And, if you're the waitress, there's a hidden message at the end just for you.

2. "Rock, Flag, and Eagle" from Charlie Goes America All Over Everybody's Ass

"Rock, Flag, and Eagle" is the most patriotic song ever composed. It's like playing the national anthem from a tank which is being airlifted into a football stadium by no fewer than 1,000 high school-educated bald eagles. Careful, though. Listening to this song at extreme volumes can cause Doritos and Budweiser to spontaneously materialize overhead.

This is the granddaddy of 'em all. Although Halloween 2007 was ruined by countless douchebags singing "Dayman, aaahhhh-AAHH-aaaahhhhh" at the top of their lungs, this remains one of the funniest moments in Sunny history. The callback in Nightman could never live up to the original, so watch it in all its glory above. And we're sorry for getting all these stuck in your head. Again.