My first reaction upon hearing that The National would be kicking off their Trouble Will Find Me tour at home in Brooklyn's Barclay's Center was one of surprise. Sure, The National have become something of a Brooklyn and indie rock institution, but still: this is the joint Mr. and Mrs. Hov play, this is the place Babs Streisand plays, this is an arena, not a rock club. I wondered how Matt Berninger and company's intimate and wild live show that is so good at profoundly connecting with the audience would translate to such a cavernous room... but about 20 seconds into the raucous opener "Don't Swallow The Cap" it was clear there was no reason to worry. 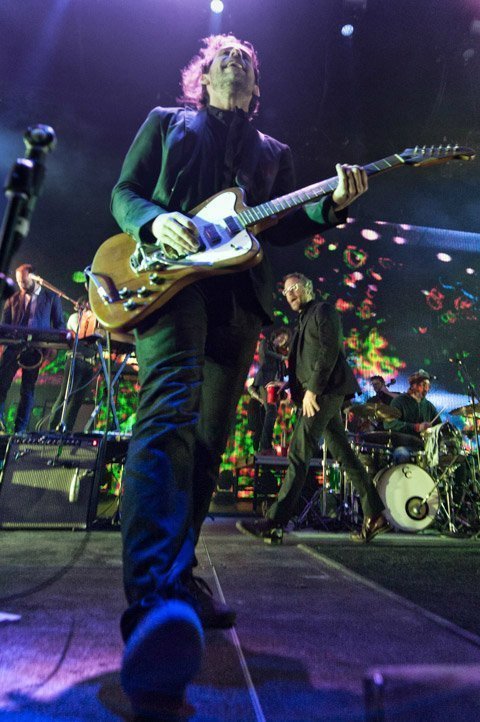 Trevor Powers' project Youth Lagoon opened the show and played a great set, even if the gargantuan, half-full room swallowed a bit of their sound. I was actually a bit taken aback by the room only being half full for Youth Lagoon. It stands to reason, for me anyway, that if you're a big indie music fan who is really into The National, you'd get there in time for Youth Lagoon as well, but such is the nature of arena shows I suppose. 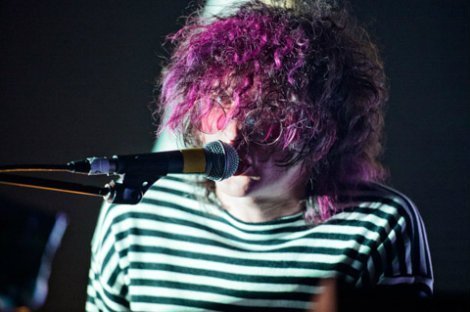 I'd recently seen Powers and company in a room of about 1,000 people at The Bell House here in Brooklyn and while this is was obviously a very different setting, Youth Lagoon was still very compelling. Their set consisted mostly of numbers from their recent release Wondrous Bughouse, and each song was filled with impressive washes of noise from Powers' keyboards, which combined with the screeching guitars created a distorted funhouse of sound. Youth Lagoon's live show rolls along like a well oiled machine and it's impossible not to be impressed by the crashing drama of the music combined with Powers' unique and haunting vocal delivery. 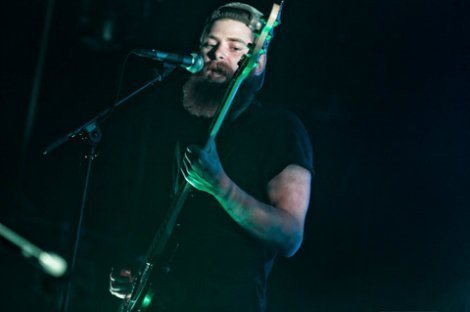 The National took the stage flanked by a four person string section and two multi-instrumentalists who played horns and added keyboard textures throughout the show, greatly enriching The National's sound. Behind the band was a huge, 50 foot video screen that showed distorted close ups of the band and various images reflecting the mood of the songs throughout the evening. When the band emerged from backstage with solo cups in hand and the six backing musicians in tow, the Barclays Center erupted and their enthusiasm was greeted immediately by the aforementioned ferocious version of "Don't Swallow The Cap". 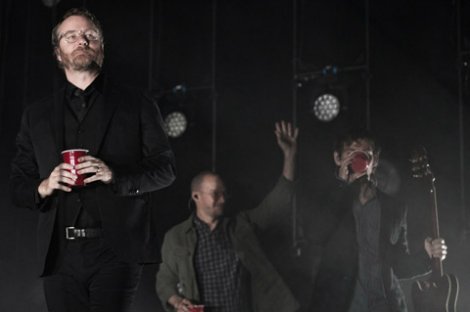 The National's music is filled with careful restraint, with the band eschewing dramatic histrionics for songs that slowly build to a crescendo with singer Matt Berninger's baritone usually becoming more dramatic and excitable as the song nears it's end. Guitarists Aaron and Bryce Dessner often hang back on record, peppering songs with a sparse note at just the right time. In the live setting, the band lets loose far more, allowing both guitarists to whip themselves and therefore the audience into a frenzy with their maniac playing. Even drummer Bryan Devendorf, whose masterful technique is probably The National's most recognizable trait after Berninger's voice, shows absolute restraint and never wastes a note. Live Devendorf is a monster, providing the track on which The National's train runs. 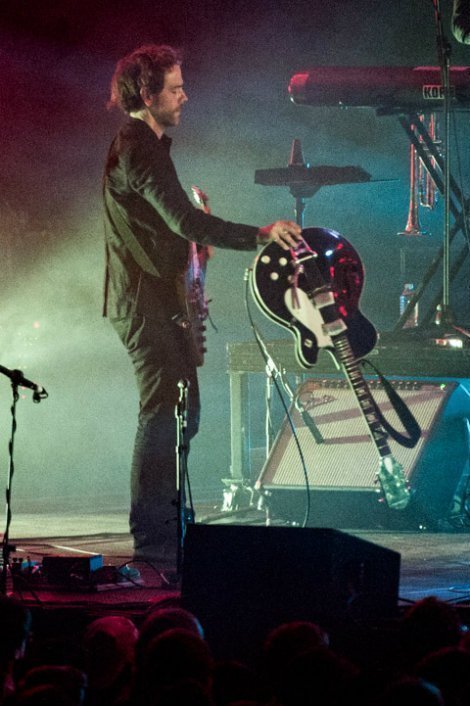 For his part, Berninger would stalk the stage while the songs build dramatically around him. He'd pace back and forth around the stage, seemingly so caught up in the music that the only thing he was cognizant of was his faithful solo cup. Things eventually got so wild that at one point during the two hour, marathon set Berninger leapt from the stage and was carried by the crowd some 60 feet away, never missing a single note. He was so deep into the floor that I completely lost sight of him, save for the sudden illumination of smartphones wherever the crowd carried him. It was intense, unexpected and truly a sight to behold as Berninger was eventually sent back to the stage, stood upright, straightened his shirt and tie and went right back into suave frontman roll. 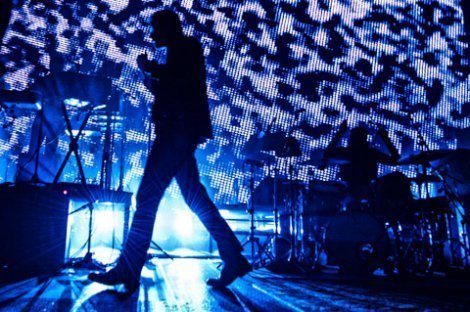 Other highlights included a version of "Graceless" that was even faster and wilder than on the record and an appearance from St. Vincent's Annie Clark and her new blonde hair to sing backup on a gorgeous version of "This Is The Last Time". "I Should Live In Salt" opened the encore and was even more heart wrenching than the album version due to an assist from the violin player that had me shivering via music-inspired goosebumps. Powerhouses like "Squalor Victoria", "Afraid Of Everyone" and "Anyone's Ghost" seemed to feed off the energy in the room as it became apparent that both the band and the audience were getting off on the fact that The National wasn't just pulling off the arena rock thing, they were triumphantly going above and beyond. 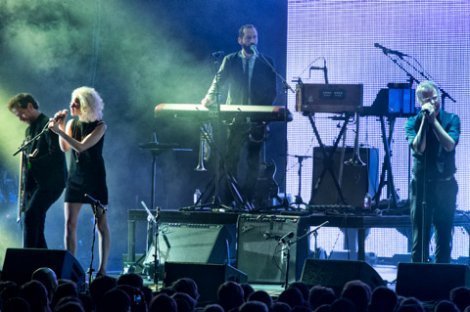 After "Terrible Love" finished the encore, the band had run out of time and left the stage, only to sudden hustle everyone back out for an amazing, acoustic version of "Vanderlyle Crybaby Geeks" that feature the whole of the Barclays Center on back up vocals. Another amazing, goosebump inducing moment in a show full of them. 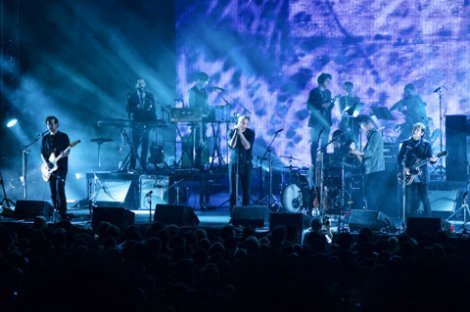 The National exudes a certain ferocity live, which considering their reputation as a band known for it's slowly paced, bummed out songs, is a bit of a surprise for some, but filled the space of the Barclays Center amazingly well. The pervading feeling for both the band and the audience seemed to be one of "Hey, these are our guys, this is the Home Team up there killing it!!!" The band was absolutely primed and ready for the biggest of New York stages (well, the second biggest), with Berninger is quipping at one point that: "We've played about thirty-five venues in and around New York, but this was always our favorite. This is where it all started." In the coming years his joking words may end up being prophetic, as The National clearly proved they are ready to step up to the next level without sacrificing the electricity of their amazing live show.

Check out the setlist and some good quality crowd-shot videos below. 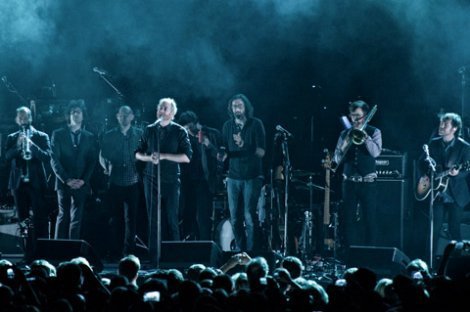 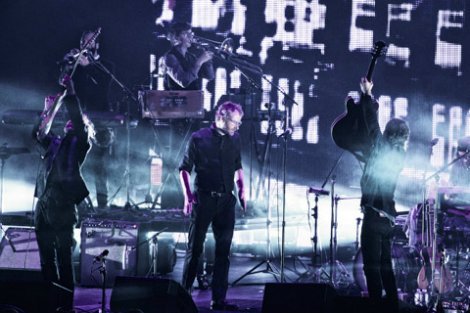 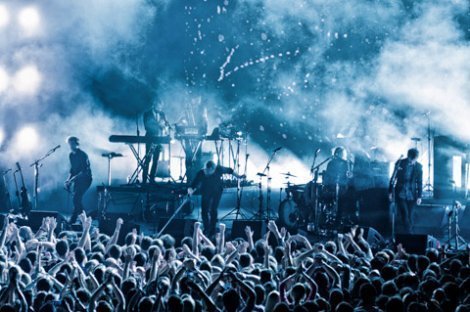 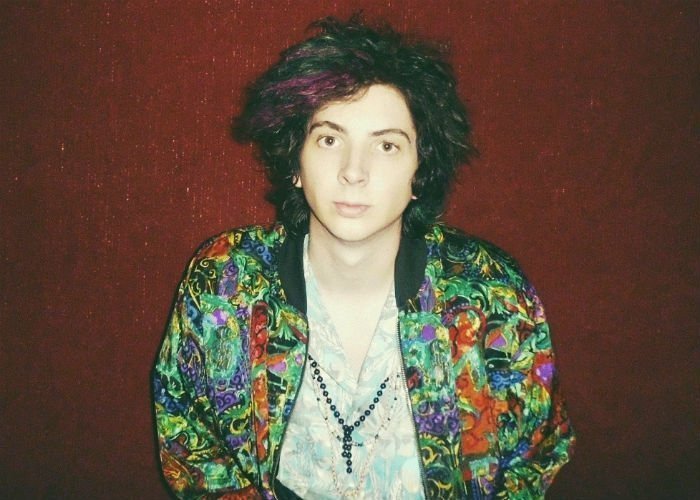 "Big Red Machine"
Big Red Machine (Spotify)
Music Experimental Indie Pop Big Red Machine Justin Vernon The National
2
702
Back to top
You must be logged in to upvote things.
Registration and login will only work if you allow cookies. Please check your settings and try again.