"It's an album -- I don't do mixtapes -- but it's more of a fun experience from some of my other music."

Roc Marciano said the above while discussing The Pimpire Strikes Back with Rolling Stone last week. It's a typically arrogant statement from the Long Island rapper, who has previously claimed that he "treats Lamborghinis like bumper cars," but as is the case with most of Marciano's boasts, his music is convincing enough to back it up.

This new free album, released by Man Bites Dog Records, features production by Madlib, The Alchemist, Evidence, and Marciano himself. There are two stellar guest spots from Action Bronson (who's so hot right now), one of which includes the following line: "I'm never cryin' from an onion, I'm eatin' pheasant out in London, tryna get that Presidential fundin.'"

The Pimpire Strikes Back precedes Roc Marciano's third "real" album, Marci Beaucoup, which has fittingly classy artwork. That's due out on December 10th, and you can listen to lead single "Ruff Town" right now.

Also, check out a Pete Rock-produced Marciano song that premiered two weeks ago, and apparently won't show up on Marci Beaucoup. 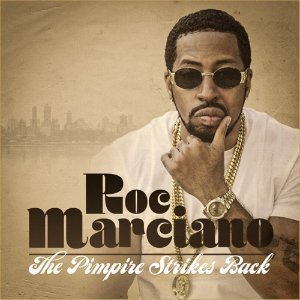