On San Francisco Giants Grateful Dead Tribute Night, Bob Weir was joined by Giants third base coach (who is also a guitarist and singer-songwriter) Tim Flannery and Tim's brother, Tom Flannery, for The National Anthem "Star Spangled Banner." First there's an introduction, and then the song starts at the 28 second mark:

It's a solid, if not spectacular performance that harkens back to American Beauty era Grateful Dead songs like "Brokedown Palace" and "Attics Of My Life" with sweet vocal harmonies.

The sound quality on this video is pretty good. The video quality is interesting; the cameraman pans around to capture much of the stadium, from Bobby, Tim, and Tom to the crowd, the jumbotron, and the AT&T Park flag poles.

Published on Aug 6, 2013
Bob Weir is joined by Giants 3rd base coach Tim Flannery and his brother Tom, ...& the Giants beat the Brewers 4-2 on Giants Grateful Dead tribute night 2013 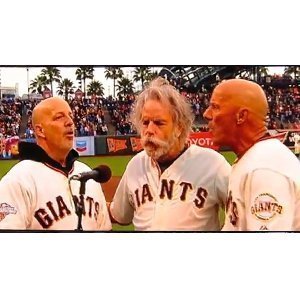