A group of kids struggles to survive in a neighborhood overrun by masked soldiers in the music video for Arcade Fire's "The Suburbs." The video, which Spike Jonze directed, follows the kids as they go from goofing off around their neighborhood to facing the very real dangers of the world around them. The video makes the perfect visualization for Arcade Fire's weighty and thought-provoking lyrics about modern suburban life. Don't miss this video, it's definitely worth your time.

The video is part of Jonze's short film "Scenes From The Suburbs," which is included on the deluxe re-release of The Suburbs. The deluxe edition debuted today in commemoration of the one year anniversary of the original album's release. In addition to the film, it also includes two other tracks from The Suburbs recording sessions, "Culture War" and "Speaking In Tongues," and an extended version of "Wasted Hours." 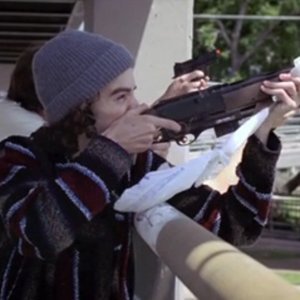