My Morning Jacket are one of the bands that have essentially led the American rock scene into the 21st century. Balancing an organic sound rooted in tradition with a consistent effort to be creative, the group from Louisville has earned their reputation as one of the best live bands on the planet. On their 2015 album, The Waterfall, they continue to churn out a heady brew of sonic gravy and epic poetry.

Every My Morning Jacket album seems to go hand-in-hand with a concept, even if that concept is just capturing the band at a particular stage of growth in their creative development and experimentation. Having said that, The Waterfall is the closest thing to a true concept album that the band has ever made.

At the front and center of the My Morning Jacket maelstrom is Jim James. The band's dynamic lead singer and guitarist has a few special qualities as a musician, a songwriter, and a producer. He and the band have a unique sound, reflecting modern indie rock while staying true to the soulful twang of classic rock and country.

Behind James, the band of Patrick Hallahan (drums), 'Two-Tone Tommy' Blankenship (bass), Carl Broemel (guitars, pedal steel, sax, vocals), and Bo Koster (keys) are a sturdy and versatile group that can pivot on a dime from hard rock to folk ballads to slow electro-grooves to reggae.

The Waterfall is symbolic of so many things. Looking at the album cover, you get a sense of the natural beauty. You get a sense of the power, but also peace and serenity. There's constant movement and progression. These things certainly apply to the album, but behind the surface there's a deeper and more personal meaning to the concept.

Jim James told Rolling Stone's Patrick Doyle, The Waterfall "is a metaphor for how life is constantly beating you down, and you really have to take time to stop it and get through." Throughout the album, the lyricism details a dark cycle of living through indecision and failed relationships.

James admitted to Rolling Stone that this was based on his real life experience. It's important to note that James had health issues during the creative process, requiring surgery for a herniated disc in his back. While going through the healing process, he co-produced the album with the highly esteemed Tucker Martine.

In a Rolling Stone article by Jason Newman, James broke down his writing style: "I like to joke if aliens came down and found my lyrics and had to come up with one overarching theme of what I was going for, they'd be like, 'This dude is really fuckin' confused.' Confusion is still my primary theme."

Without reading and dissecting the lyrics and interviews, you probably wouldn't realize that the album told such a sad story. That is because it sounds so damn good!

"Believe (Nobody Knows)" is an upbeat and exciting opening, setting up the dark philosophical journey. The band achieves liftoff during "Compound Fracture," combining bombastic prog-rock with disco-era R&B in an interesting way. Early in the song, it feels like the band might have gone off the rails on their way to cheesy territory, but they come together and the result is actually somewhat spellbinding.

"In Its Infancy (The Waterfall)" is a classic MMJ jam. You can hear shades of MMJ's 2003 hit "One Big Holiday" in the hi-hat intro before an electro-church keyboard breakdown takes the album to a higher level. Layers of grooves dance around each other, as crushing guitar and funky spaceship keys push the creative envelope. My Morning Jacket prove they can still make awesomely weird rock records with a strong hook.

"Big Decisions" is another MMJ instant classic. This is the kind of song that should be a radio hit, with its steady groove and pleasant vocals. The pedal steel guitar is really nice, falling somewhere between Nashville Opry and Hawaiian slack-key.

"Spring (Among The Living)" is a soaring epic rocker. If you're familiar with the MMJ bear motif, you'll get a chuckle out of the fact they wrote a song explicitly about coming out of hibernation.

"Like A River" and "Get The Point" show James' brand of folk-rock-meets-chamber-pop, evoking an easy comparison to Paul McCartney's work on Magical Mystery Tour and as a solo artist.

The bonus tracks on the deluxe version of the album include two songs that didn't make the LP ("Hillside Song" and "I Can't Wait") and two alternate recordings of songs that did make the LP ("Compound Fracture" and "Only Memories Remain"). The songs that didn't make it are solid tunes, but you can see why they were cut. The alternate versions show some insight to the band's songwriting and recording process, and "Compound Fracture" (Miami Jungle Version) is a particularly good listen.

Compared to My Morning Jacket's previous album, Circuital, released in 2011, The Waterfall may be a bit of a letdown. James' writing was at an emotional high point on Circuital, turning out joyous songs like "Victory Dance" and "Wonderful (The Way I Feel)."

Even when he sings about devastation and depression, Jim James' voice and guitar shines as he fights against the flow to achieve the rarified air of glorious sound. This is the type of LP that audiophiles and vinyl record collectors will definitely want to check out because of the great sound quality. There are a few weak moments that feel a little uninspired, and the lyrics openly discuss that struggle. Even so, this is an excellent album. There's no denying that My Morning Jacket are a force to be reckoned with, making life-affirming music through good times and bad.

The Waterfall is available on Amazon (Vinyl, CD, MP3). Be sure to check out My Morning Jacket's tour dates to see their live show. 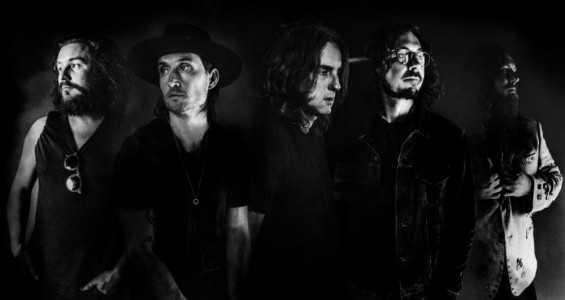