Black Sabbath announced today on their website the official details of their brand new live DVD, "Live...Gathered In Their Masses." Included were packaging details, a set list for both the DVD portion and the bonus CD, and a trailer that includes scenes from the shows as well as interviews with Ozzy Osbourne, Tony Iommi, and Geezer Butler. The set is due to release November 26th and is available for pre-order now through the band's website.

The DVD was created with scenes from Sabbath's April 29th and May 1st shows in Melbourne, Australia, where they toured to support their newest album 13, their first with three of the founding members in thirty-five years. The trailer briefly chronicles the making of the album and the experience of touring again. Butler reflected on the time passed: "It didn't seem like thirty years for us, since we've been together, it just seemed really natural." Iommi describes the length of the album, a weighty sixteen tracks as opposed to the eight track albums the band is used to.

Ozzy of course, talked about the drugs. "We were all sober, or, nearly all," Ozzy muttered, eliciting laughter from the rest of the band.

"Live...Gathered In Their Masses" features fifteen tracks on the DVD/Blu-Ray, including new tracks off of 13, which were performed live for the first time on this tour. The list, containing a nice pastiche of the band's 40 year history, is as follows:

Also included in combo editions with either the Blu-Ray or the DVD is a CD of the live audio of the show, including these tracks listed:

Sabbath diehards can enjoy the Deluxe Box, which includes the Blu-Ray, two extra DVDs of exclusive content, the CD, a poster, a signed set list, a photo booklet, guitar picks, and an "official show ticket." 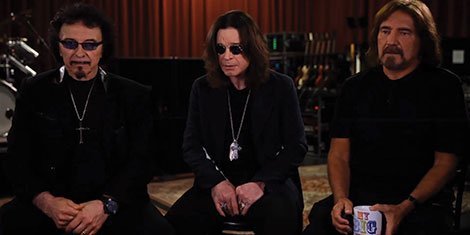 "Paranoid"
Weezer (YouTube)
Music Classic Rock Hard Rock Hits Metal Rock Black Sabbath Weezer Audio Single
2
913
Back to top
You must be logged in to upvote things.
Registration and login will only work if you allow cookies. Please check your settings and try again.