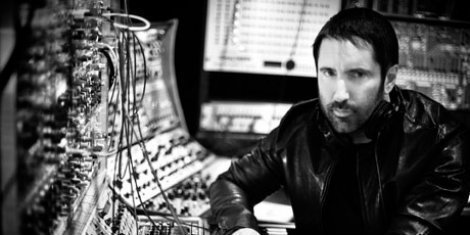 In an interview with The Guardian last week, Nine Inch Nails frontman Trent Reznor talked about his battles with drug addiction and his subsequent road to recovery, politics, the departure of two band members earlier this summer, and of course the new NIN album coming out in less than a month. Reznor is candid and honest, and reveals a lot of information about the upcoming Hesitation Marks.

Hesitation Marks started with Reznor writing two new songs intended for inclusion on a greatest hits compilation. However, he was so happy with his new material that he decided it would be better to pursue a new full-length LP rather than just a hits collection. As he described the two new songs, "It felt fresh instead of a chore or a job. They felt like two different versions of where I might go if I were to start making a record. So I thought: 'Rather than piss these away on a greatest-hits record which nobody cares about, including me, why don't we see if there's an album in there?'"

Reznor was writing alone at first, and says that what he found most inspiring was "sitting with just a drum machine in my bedroom, in my office. Not having a keyboard or a guitar and playing everything on pads. Me sitting alone with literally one piece of gear just messing around, I found it exciting. It lent to the minimal edge, because it didn't feel like it needed more."

The sound of the new album is purposefully akin to that of Nine Inch Nails' best known record, 1994's The Downward Spiral. This stemmed from something David Bowie had said to him years before, when the two acts toured together in the mid '90s.

When I was in the throes of that was when we toured with Bowie, and this was the Bowie that had come out the other side and was happily married. I was nearing the peak of my addiction, and his role to me was kind of mentor, big brother, friend, and also he'd give me kind of shamanish advice. He was playing everything from his Outside album and he said: 'You guys are going to destroy us on stage because we're not playing anything anybody wants to hear. Nobody really wants to hear this new album. What they want to hear is The Jean Genie and all the hits but I don't have it in me to do that now.' I thought that's kind of dumb on one hand, then I thought, to build something, a persona or a sound, and it's not broken and worn out, and then throw it out and try something new … man, it takes balls to do that. Would I ever have the courage to do that, or would I do careers and expectations and fitting in?

Reznor reveals that he was "thinking a lot about" The Downward Spiral, and "the person that I was at the time."

Downward Spiral felt like I had an unending bottomless pit of rage and self-loathing inside me and I had to somehow challenge something or I'd explode. I thought I could get through by putting everything into my music, standing in front of an audience and screaming emotions at them from my guts ... but after a while it didn't sustain itself, and other things took over – drugs and alcohol.

And I'm happy that I don't feel that way anymore. I've learned to recognize, a lot of it forced through the process of recovery, that I'm wired wrong in certain ways, the chemical balance of my brain is off in terms of depression a little bit. This record was written as the other side of that journey. The despair and loneliness and rage and isolation and the not-fitting-in aspect that still is in me, but I can express that in a way that feels more appropriate to who I am now. And often that rage is quieter.

This new album with the "quieter rage" is already getting quite a bit of attention. Nine Inch Nails released their first single, "Came Back Haunted," as well as a fresh track called "Copy Of A." The band has also debuted a handful of songs live, at both Lollapalooza and the Ansan Valley Rock Festival.

Hesitation Marks will be released on September 3rd. It can be pre-ordered on iTunes, in either the standard 14-track version or in a deluxe edition with 3 bonus remixes and an interview. You can also pre-order various versions on Nine Inch Nails' official site.

"Outside"
Trent Reznor (YouTube)
Music Ambient Electronic Atticus Ross Trent Reznor Audio Single
2
1113
Back to top
You must be logged in to upvote.
Registration and login will only work if you allow cookies. Please check your settings and try again.