Washington band Melvins have released 18 studio albums to date, but Tres Cabrones is the first to feature their original drummer Mike Dillard, who returns after leaving the band prior to their first album. Tres Cabrones drops in a week, but Pitchfork has the full stream right now. Check it out above.

The Melvins' longevity has not detracted one bit from their oppressive heaviness -- which shows up in full force throughout the album -- but it may have caused changes to their original style. Rising to fame with repetitive, frequently dissonant bursts of metallic sludge, the Melvins slightly alter that formula on Tres Cabrones, tailoring their songs to a more traditional hard rock format. Opener "Mule" is positively anthemic, and more likely to incite triumphant fist pumping than anything else in their catalog, though it still contains plenty of offbeat weirdness.

Speaking of which, the three shortest tracks on Tres Cabrones are all covers of Traditional songs, all under two minutes, and all utterly ridiculous. They serve as comic relief on an otherwise unrelenting album, trading punishing riffs for junkyard percussion and goofy falsettos.

But the Melvins are at their best when they're heaviest, and on Tres Cabrones, "American Cow" takes that cake with ease. A grungy riff and titanic beat lumber jerkily through verses that reference psychedelics, and climax with a chorus that finds King Buzzo channeling his inner Ozzy. It's the perfect combo of classic metal and classic Melvins.

Preorder Tres Cabrones on Amazon, and check out the tracklist below. 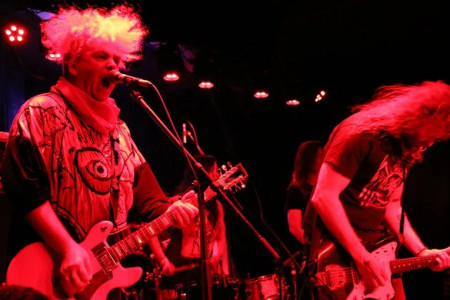