Despite the stoned wackiness of this year's Saaab Stories EP, Action Bronson still has yet to out-weird the phenomenal Blue Chips mixtape, a collaboration with producer Party Supplies. In August, Bronson tweeted:

BLUE CHIPS 2 DROPPING THE FIRST DAY IT RAINS IN QUEENS IN NOVEMBER.

Party Supplies' instrumentals on the first Blue Chips were notable for the varied sources from which they sampled, including songs by Dean Martin, Peter Gabriel, and Iron Butterfly, and the new tracks live up to that legacy. Bronson cues the first song by asking his DJ to "play that Tracy Chapman shit," which seems to be a joke until, sure enough, a looped guitar line from "Give Me One Reason" blares out of the speakers, serving as the only accompaniment to Bronson's punchline-filled verse.

The Champs' classic "Tequila" provides the backbone for next next track, and even prompts Bronson to whip out an impeccable Pee Wee Herman dance. Though the live video's quality isn't the greatest, it's enough to get us severely hyped for Blue Chips 2. 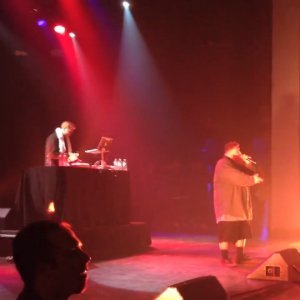 Action Bronson Announces 'Blue Chips 7000' Tour Dates: Ticket Pre...
Tickets Hip Hop Action Bronson
1
1235
Back to top
You must be logged in to upvote things.
Registration and login will only work if you allow cookies. Please check your settings and try again.