Soul Temple Records, you know the RZA run label that recently put out the cinematic opera/comic book/raw hip hop album that was Ghostface & Adrian Younge's 12 Reasons To Die, is set to drop more heat this summer. 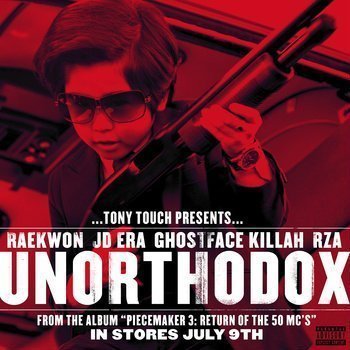 Today, they released the first single "Unorthodox" off Tony Touch's album Piecemaker 3: The Return of the 50 MC's, in stores July 9th. The cut features JD Era alongside Wu Tang's Raekwon, Ghostface and a verse from the abbot himself, RZA.

As RZA says himself, "I'm the most wildest, craziest, unorthodox rhymin' MC."

Like all Soul Temple releases, there is a limited edition vinyl of the single which you can pre-order here.