What do you get when you combine an abandoned warehouse, a tiny red Steinberger guitar, and some freeze-your-soul staredowns from a glam rock legend? "Valentine's Day," the just-released music video from David Bowie. Indrani and Marcus Klinko, who also worked with the British musician on the artwork for his 2002 album Heathen, directed the video. It features a white-clad Bowie showing off both his miniature guitar and his different colored eyes, which he uses to great effect in some particularly haunting close up shots. Despite the cold looks, his voice is in great shape and sounds smooth and powerful throughout. Check out the video above and see for yourself.

"Valentine's Day" is a single from Bowie's latest album The Next Day, which debuted in March to great critical acclaim and earned a number one album spot in the UK. Additionally, "Valentine's Day" will be released as a 7" picture disc on August 19th in the UK and August 20th in the US. 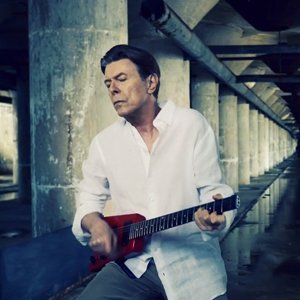