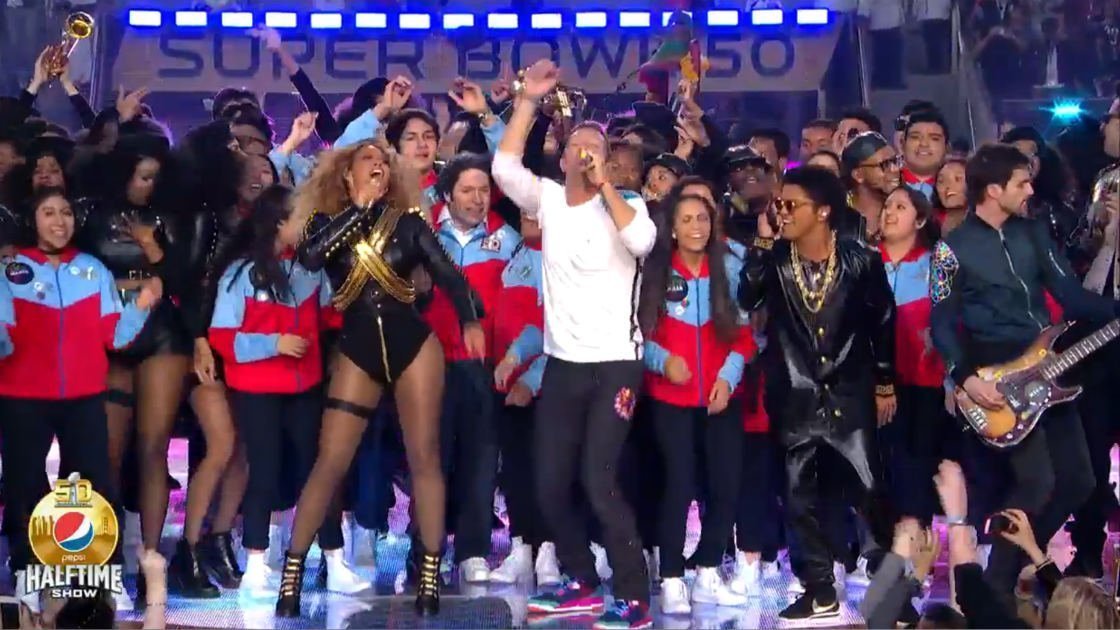 Coldplay held their own, even though their style of soft rock isn't a great fit for the Super Bowl crowd. Their set list included: “Viva la Vida,” “Paradise,” “Adventure of a Lifetime,” “Fix You,” and the closer “Up & Up." Haters gonna hate, and it didn't take long for the band to be skewered by The Onion.

This year's Super Bowl Halftime Show was a wild one, thanks to spectacular guest appearances from Bruno Mars and Beyoncé, who went back and forth between their songs "Uptown Funk" and "Formation" to great effect. Mark Ronson even made an appearance as the DJ before "Uptown Funk." The energy between Mars and Beyoncé is really incredible, and they do an amazing job playing to the cameras.

The third part of the performance included a very cool flashback video montage that showed some of the greatest moments in Super Bowl music history, beginning with Bruce Springsteen and his crotch-first slide into the camera in 2009.

Immediately after the performance, Beyoncé announced her 2016 Formation World Tour.

This past Friday, tickets for all of Coldplay's 2016 tour dates officially went on sale.

Will Bruno Mars be announcing tour dates next? We certainly hope so!

Click the links above for Part 1, Part 2, and Part 3, to watch the official videos on NFL.com.

"BLOW"
Ed Sheeran (YouTube)
Music Rock Bruno Mars Chris Stapleton Ed Sheeran Official Music Video
3
1536
Back to top
You must be logged in to upvote things.
Registration and login will only work if you allow cookies. Please check your settings and try again.