HD video has recently surfaced of Jack White performing The White Stripes song "We're Going To Be Friends" at Town Hall in New York City for a National Recording Preservation Foundation fundraiser in conjunction with the movie Inside Llewyn Davis. It also appears to be part of a documentary to air on Showtime TV later this month. Check it out:

When the crowd hears the familiar start to the song, there's a strong positive reaction and the band certainly doesn't disappoint. It's a beautiful performance of the song, featuring an upright resonator acoustic bass, banjo, and fiddle accompanying White. What's amazing is how the song unfolds toward the end, as layer upon layer open up like a blossoming flower. This is what great music can do. Unfortunately, the camerawork is below average. However, the audio quality is good.

This performance will be part of the documentary Another Day / Another Time: Celebrating the Music of "Inside Llewyn Davis" which also features the Avett Brothers, Joan Baez, Dave Rawlings Machine, Rhiannon Giddens, Lake Street Dive, Colin Meloy, The Milk Carton Kids, Marcus Mumford, Punch Brothers, Patti Smith, Willie Watson, Gillian Welch, and the star of the film Oscar Isaac. The program is set to be broadcast on Showtime TV beginning Friday December 13th at 10pm ET/PT. Check out the official trailer: 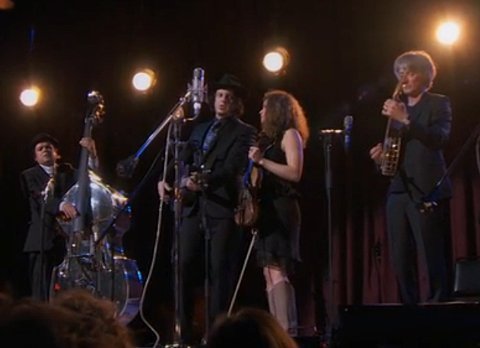 "Sunday Driver, Now That You're Gone"
The Raconteurs (YouTube)
Music Garage Rock Indie-Rock Rock Brendan Benson Jack White The Raconteurs Official Music Video
2
850
Back to top
You must be logged in to upvote things.
Registration and login will only work if you allow cookies. Please check your settings and try again.