Fordham University's public radio station, WFUV, has released a free stream of Wilco's entire two and half hour Saturday night set from their Solid Sound Festival (be patient, it takes some time to load). At the beginning of the show, lead singer Jeff Tweedy warned the crowd, "I hope you guys have some time, we've got a pretty long list to get through tonight." The band didn't disappoint, reaching back through their entire catalog, including Mermaid Avenue, their cover album of long-lost Woody Guthrie songs. Take a listen to this great performance from a talented band, via WFUV.

The festival, which Wilco started in 2010, returned this year after a hiatus in 2012. It took place June 21-23rd at the Massachusetts Museum of Contemporary Art in North Adams, MA. Yo La Tengo, Foxygen, and many other bands and solo artists also appeared at the festival, which celebrates both music and contemporary art. Wilco, however, were definitely front and center. They played a request-only cover set on Friday night, which included songs by Bob Dylan, The Rolling Stones, Big Star and Daft Punk (yes, that's right, they covered "Get Lucky"), in addition to their Saturday night show. 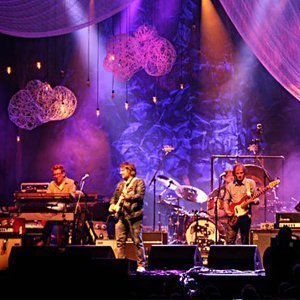 Wilco and Trampled by Turtles Set 2020 Tour Dates: Ticket Presale...
Tickets Alt Rock Americana Bluegrass Folk Rock Trampled By Turtles Wilco
1
830
Back to top
You must be logged in to upvote things.
Registration and login will only work if you allow cookies. Please check your settings and try again.