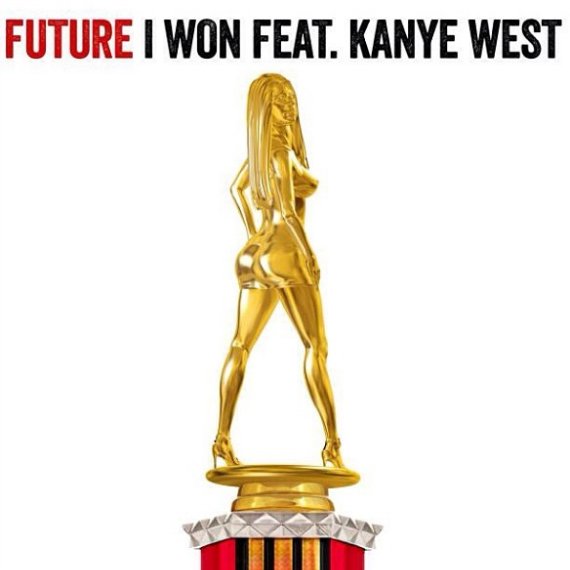 With Future's long-awaited Honest now just two weeks away from release, the auto-tuned crooner has shared what is possibly the album's most hotly anticipated track: the Kanye West-assisted "I Won." Produced by Future's ATL buddy Metro Boomin, "I Won" turns the concept of the trophy wife into an delightful banger -- stream it above, and check out the lyrics below.

Centered around Future and Kanye's respective special ladies, Ciara and Kim Kardashian, "I Won" has the two stars expounding upon the various traits that make them and their soon-to-be spouses worthy of valuable, metallic statues. In Future's case, he claims that Ciara's ass is "gettin' fatter... because of me," and Mr. West counters with the even less believable claim that he "put an angel in [Kim's] ultrasound." Metro Boomin continues down the path of Kanye-esque baroque-&-b that he embarked upon two weeks ago with Young Thug on their fantastic remake of Drake's "The Language," bringing an instrumental to the table that features gorgeous piano and strings.

Stream two of Honest's previously-released tracks, "Move That Dope" and "Covered N Money," right here on Zumic. Visit Future and Kanye West's respective Zumic artist pages for more of their music, videos and news, and check out the lyrics to "I Won" below.

You the number one trophy wife
So it's only right to live the trophy life
You grew up on J. Lo, Timberlands by Manolo now
Till one day I put an angel in your ultra sound
I want to dip that ass in gold, I want to dip that ass in gold
I made it over NBA, NFL players
So every time I score it's like the Super Bowl
Baby, we should hit the south of France
So you could run around without them pants
I put that glacier on your little hand
Now that's the only thing without a tan
My trophy on that Bound bike, I gave you only pipe
If people don't hate then it won't be right
You could look at Kylie, Kendall, Kourtney and Khloe
All your Mama ever made was trophies, right?

"All da Smoke"
Future and Young Thug (YouTube)
Music Hip Hop Trap Future Young Thug Atlanta, GA
2
1042
Back to top
You must be logged in to upvote things.
Registration and login will only work if you allow cookies. Please check your settings and try again.