"You Need To Calm Down" - Taylor Swift [YouTube Music Video]

"I would love for us to be a symbol of redemption and forgiveness" - T. Swift on Y.N.T.C.D. video

Nobody creates a viral pop song quite like Taylor Swift. This week, she released her newest hit, "You Need To Calm Down," with an over-the-top music video featuring over 20 cameos from LGBTQ celebrities. Watch above on YouTube.

Swift is at the top of her game when she pokes fun at her larger-than-life personality while also singing big catchy melodies over danceable grooves, and "You Need To Calm Down" has all of the above. The song and video start with Swift addressing her haters with humor, using memorable lines like "Damn, it's 7 AM."

Before releasing the video, Swift started a Change.org petition to support the Equality Act (recently introduced by Democrats in the House of Representatives), in conjunction with LGBT Pride Month. This song brings that message to the forefront in the second verse, as Swift mentions GLAAD (The Gay & Lesbian Alliance Against Defamation) while A-list gay icons grace the screen, including Netflix's Queer Eye cast, RuPaul, Laverne Cox, Adam Rippon, and Ellen DeGeneres — as well as drag versions of Beyonce, Cardi B, and Swift.

On its surface, this is a fun video with a positive message. However, Swift has caught some flack for the representation of the anti-gay protesters in the trailer park as opposed to the politicians who actually have power over the way civil rights are defined and enforced. Others, like The Onion have cynically lampooned how a straight woman has co-opted the queer movement in her own interests.

For the most part, Swift's fans and the gay community have been tremendously supportive of the video and the cause. TMZ reports that GLAAD received "an influx in donations overnight" after the song was released, and Lorenzo Marquez of Tom & Lorenzo shared the powerful message on Twitter, "'You Need To Calm Down' made me cry. No shame to admit. Didn't have that type of support growing up. Can't speak for the entire community, but I personally appreciate it and thank Taylor Swift."

To finish things out, Swift gets back to a more personal topic, singing, "And we see you over there on the internet / Comparing all the girls who are killing it / But we figured you out / We all know now we all got crowns," as we see her and Katy Perry hug it out after years of rumors about tension between the two. Dressed in the infamous Met Gala hamburger gown reflecting 2019's Camp theme, Perry helps settle the beef while Swift joins in harmony as the french fries. In an interview with the BBC, Swift explained, "I would love for us to be a symbol of redemption and forgiveness."

The song will appear on Swift's upcoming album, Lover, scheduled for release on August 23. 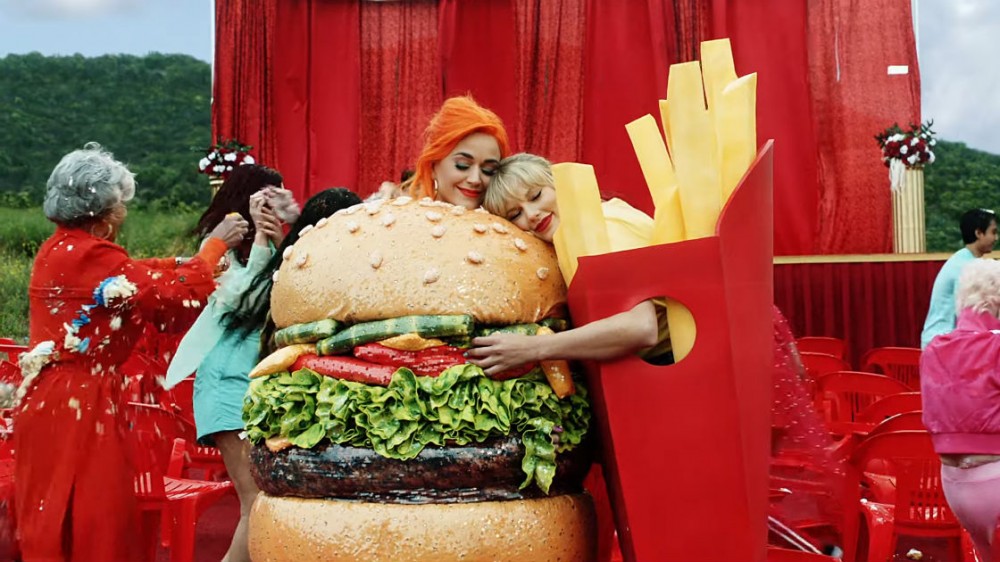 "End Game"
Taylor Swift (YouTube)
Music Pop Ed Sheeran Future Taylor Swift
2
1383
Back to top
You must be logged in to upvote.
Registration and login will only work if you allow cookies. Please check your settings and try again.