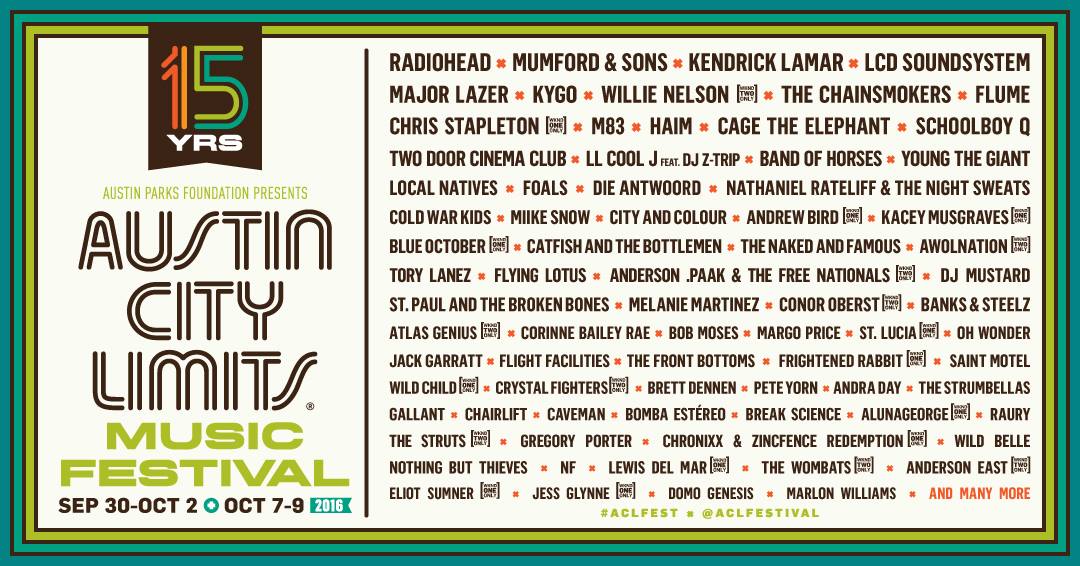 The 2016 Austin City Limits Music Festival will hit Zilker Park in Austin, Texas, for two weekends this fall. Kicking off Friday, September 30, through Sunday, October 2, and resuming Friday, October 7, through Sunday, October 9, the festival will feature eight stages with over 130 artists, and this year’s lineup includes headline performances from Radiohead, Mumford & Sons, Kendrick Lamar, and LCD Soundsystem across both weekends. Other performers include Chris Stapleton, LL Cool J, Young The Giant, Major Lazer, Haim, and many more.

Passes for Austin City Limits across both sets of dates went on sale earlier this month. On the primary market, 3-day general admission passes for Weekend One (originally priced at $255) are entirely sold out. Weekend Two 3-day general admission passes are still available, but going fast. According to data provided by TiqIQ, weekend passes are currently averaging $479 across both weekends on the resale market, with the cheapest available at $273.

Aside from music, there will be several other attractions for fans and concert goers to experience at the ACL Music Festival. Art Markets with accessories, cowboy boots, posters, and more will be there to explore, as well as a station set up for kids and families called Austin Kiddie Limits. The kids section will have several creative and informative activities, in addition to necessities for kids like baby-changing stations. Hotels for Austin City Limits can be secured through Hipmunk.com, with rates starting as low as $50. Flights to Austin can also be found through Hipmunk.

Other spots will serve as phone-charging stations, and some of the best areas to take photos across the grounds will be highlighted. Food vendors will be set up with some of the area’s favorite restaurants, and local charities and organizations will be set up to educate and share information on the work they do throughout the community, as well as how you can get involved. Overall, Austin City Limits 2016 will be an experience fit for the entire family!


This article is sponsored by TiqIQ.