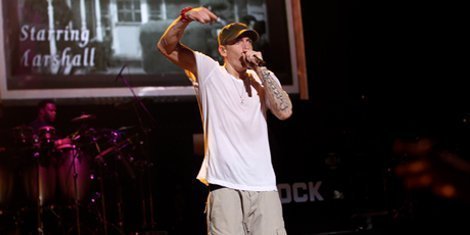 Watch manufacturers G-Shock brought out none other than Eminem to perform at the company's 30th anniversary party, "Shock The World." The Grammy-winning rapper is endorsed by G-Shock and teamed up with them for a special edition watch commemorating the company's 30 years. At the party he played "Won't Back Down" off his Grammy-winning album Recovery, along with career anthems "Stan" and "Lose Yourself." He was then joined by his Bad Meets Evil partner Royce Da 5'9 for a performance of the duo's "Lighters."

Em will be touring in Europe, headlining this year's Pukkelpop Festival in Belgium, followed three shows with Kendrick Lamar, Slaughterhouse, Yelawolf, Plan B, and Tyler, the Creator and Earl Sweatshirt a.k.a. Earlwolf. Check out the dates below along with clips from the "Shock The World" performance below - enjoy!

"Walk On Water"
Eminem ft Beyoncé (YouTube)
Music Hip Hop Beyoncé Eminem Detroit, MI
4
2069
Back to top
You must be logged in to upvote.
Registration and login will only work if you allow cookies. Please check your settings and try again.