Metallica were on The Colbert Report last night, an occasion which marked their first television performance since a 1997 appearance on Saturday Night Live.

The band sat down with Stephen for a brief interview, in which the band discussed their upcoming 3D film Metallica: Through The Never (or, as Colbert called it, Under The Sometimes). He also asked about the band members' need for anger to play such thrashing music: "Can you keep your anger up, James? Do you need anger Viagra?" -- which, I submit, should be called "Viangra."

Watch the full interview and the web exclusive performance of "Master Of Puppets" below.

Check out the full episode over at Colbert Nation. 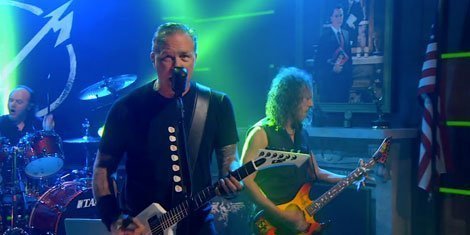 Metallica and Slipknot Team Up for 2019 Tour Dates: Ticket Presal...
Tickets Alt Metal Classic Rock Metal Rock Metallica Slipknot
3
2231
Back to top
You must be logged in to upvote things.
Registration and login will only work if you allow cookies. Please check your settings and try again.