In case you didn't know, Kendrick Lamar is the most interesting rapper in the world right now. He stopped by the Arsenio Hall show to perform two songs with a live band and shed some light on who he is, where he's coming from, and what he's doing.

To start things off, Kendrick Lamar performed the title track of his 2012 album, "M.A.A.D. City":

After his first performance, K Dot sat down with Arsenio Hall for a fantastic 11+ minute interview. Among other things, Kendrick explains the personal significance behind the title of his 2012 album, Good Kid, M.A.A.D City, growing up in Compton, his Black Hippy crew with Schoolboy Q, Jay Rock, and Ab-Soul, being called "the black Dylan" by Pharrell, being named after Eddie Kendricks by his mother, and of course his devastating verse on Big Sean's "Control" that's been the most talked about song in the Hip-Hop world in a long time. Check it out below:

To finish the show, ScHoolboy Q & Kendrick Lamar performed "Collard Greens" which includes a hilarious moment where the beginning of Kendrick's verse is completely bleeped out by the censors: 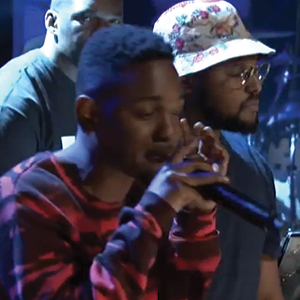