Eminem's new album, The Marshall Mathers LP 2, comes out in less than a week. Today, we're treated to "Love Game," a new collaboration between Em and Kendrick Lamar that will appear on the album.

Sampling Wayne Fontana & the Mindbenders' "Game of Love," the track has a vintage feel that's either goofy, charming, or both. The beat sounds similar to A Tribe Called Quest's "Scenario," and there are a few lyrical references that acknowledge that. At one point, Eminem calls back to Kendrick's "Control" verse, listing various celebrities that allegedly slept with his ex-fiancé. Overall, "Love Game" is a light-hearted bit of relationship rap that makes Em's own "Love the Way You Lie" seem like a DMX song.

Somethin's burnin', I can't figure out what
It's either lust or a cloud of dust
Judgement is clouded, must just be the powder from the power of love
But I'm in somethin' I don't know how to get out of
Left my girl in the house alone
Is that my soon to be spouse’s moan
And the further I walked allowed her
I paused for a minute to make something, that's what I heard
Cuz after all this is her place
So I gave her the benefit of the doubt
Think I might be about Busta Busta
The thought's so scary, yo that it hurts, brace
Hope it ain't, there we go, yo
Cause my head already goes to worst case scenario, though, in the first place
But you confirmed my low end theory, though
Should've known when I made it all the way to third base
And that was only the first date, coulda made it to home plate
But you slid straight for the dome and dove face first
No, you don't, under, stand, I, don't, do this for
Anyone, ever, Yeah that ain't what they all say
I'll say it, you can suck a softball through a straw, used to be my fiance
'Til you sucked on Wayne, Andre, and Kanye
Lebron, Akon, Jay, Lil Jon, Raekwon, Ma$e
Polow Tha Don, Drake, Dante Ross, James Conway, Kwame
Guess I'm gettin my goddamn Jigga on
Cause your name, I'm beyond sayin'
But fuck it, I'm movin' on, you women are all crack
But I'll probably always keep playin' the game of

I told that bitch
I'm a sucker for love, you're a sucker for dick
Suckin' dick in your momma's tub 'til your granny walked in
Told the stupid nigga to duck under the water, he drowned
Like abortion, they booked you for manslaughter, you beat the case and I called you
"Sherane is not available but leave a message at the tone
And Kendrick don't forget to buy two pair of those
Expensive heels, you fuckin' little ferris wheel
Fuckin' spendin' on me, fuck you think we gon' get married still?
Fuckin' Mary had a little lamb, this ain't no fairy tale
Fairy godmomma better tell you how I fuckin' feel
Like you should fuckin' beat it and fuckin' eat it while I'm on my period
Now have a blessed day"
Bitch you serious? I'm in the mirror with this look on my face, curious
Why you ain't fuckin' with me, you cut me up, a Caesarean
You know I want you bad as a Benjamin, I'm delirious
I want you bad as the head shattered on George Zimmerman
After the dillinger hit'em diligently and killin' him
His mouthpiece for a Cadillac emblem
That's analogy and metaphor for yah
I should win a medal for all the ways I adore yah
This is me talkin' poetry, yeah I got some home trainin'
That ain't what you like, ain't it? What about if I was famous
As Marshall, would you give fellatio in the carpool
Cops pull us over, they just wanna know if you gargle, singin'
I hope she's good enough, meanwhile you're chasin' her
Chlamydia couldn't even get rid of her
Pity the fool that pity the fool in me, I'mma live with the

So needless to say I'm feeling betrayed
Snatched my housekey off my keychain
She jumped off, Wee-Bay from The Wire, escape
Now she's chasin' me with a cheese grater
Here goes that broken record, cliche, it's all my fault anyway
She's turnin' the tables, I'm a beat-break
Treats my face like seratos, she cuts and scratches like a DJ
Each day is an instant replay
They sayin' we display cinethematic abatic behavior
Back together but forgot today was her b-day, cut me off on the freeway
Simple misunderstandin' but just as I went to slam on the brakes
Then I realized that she may be as crazy as me, wait
Bitch cut my fuckin' brakeline, stepped on them fuckers 8 times
Still goin' 73, thank God there's an exit coming up
But them other F-U-C-K's all would of hit the off ramp
So I coast into a gosh damned aww hit a fuckin' tree
Now here she comes at full speed, she's racin' at me, okay you wanna fuck with me, eh?
Snatch the bitch out her car through the window, she screamin'
I bodyslam her onto the cement, until the concrete gave and created a sinkhole
Bury this stink ho in it, then payed to have the street re-paved
Fuck, woke up in a dream state in a cold sweat like I got hit with a freeze ray durin' a heat wave
Guess I eventually caved though, cause she's layin' next to me in bed
Directly aimin' a gat at my head
Woke up again and jumped up like fuck it, I've had it, I'm checkin' into rehab
I confess I'm a static addict, I guess that's why I'm so clingy
Every girl I've ever had either says I got to much baggage
Or I'm just too dramatic
Man what the fuck is the matter? I'm just a fucking romantic
I fucking love you, you fucking bitch!
Combative, possessive, in fact last time I was mad at an ex
I actually set off a chain reaction, a tragic event
I said "hit the road" and after she left
I sent I sent a barrage of texts
I said "be careful driving, don't read this and have a accident"
She glanced to look at it and write/right, too bad
Thought we had a connect
No sense dwelling makes, never been a more compelling case
Than a model covered in L'Oreal and mace, who fell from grace
Eleven stories for story telling but the whore was yelling "rape"
So the vocal cords were swelling and her voice were more hoarser than Tori Spelling's face
Still they swarm the gates and my fans making stakes to greet Norman Bates with a warm embrace
Unless you're Andrea Yates, don't ask me for a date, don't be late
Well the sentiments great, but wait then there's been a mistake
You want an intimate date, I wanna intimidate
I have infinite hate in my blood, it's mainly because of the game of
(*Message sound*)
Wait dinner at eight
I have infinite hate in my blood, it's mainly because of the game of 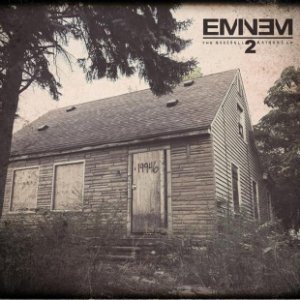 "Lucky You"
Eminem (YouTube)
Music Hip Hop Eminem Joyner Lucas Official Music Video
2
2165
Back to top
You must be logged in to upvote.
Registration and login will only work if you allow cookies. Please check your settings and try again.