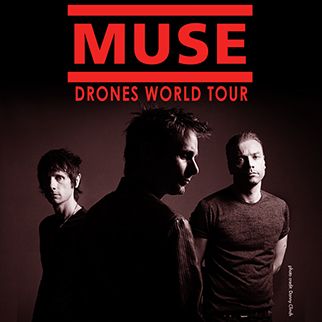 Muse knows how to put on a show and regardless of whether you like their music or or not, that is a fact.

With the announcement of some new shows for their world tour promoting their newest studio album, Drones, the British rock group has been causing quite a ruckus at the box office. As if it wasn’t enough to top both US and UK charts with the release of Drones, the band has also been filling up venues in record times across the globe in cities like Madrid, Lisbon, Milan, Glasgow, London, Dublin, Singapore, and Mexico City. This has led to additional dates being announced across several cities.

But Muse’s continuous success isn’t limited to primary market ticket sales. According to international secondary ticketing firm, Ticketbis, from 2014 to 2015 the average price fans are willing to pay to see the band live went up 25 percent from €102 ($114) to €128 ($143) per ticket.

The most expensive city on the roster is Singapore, where tickets are averaging 191 euros ($213). Meanwhile, Passes to see Muse’s Drone Tour are the cheapest in Lisbon, averaging only €74 ($83), according to Ticketbis’ in-depth figures.

With their current tour, Muse are bringing a completely new experience to fans. They will perform from the center of the arena, giving a “true 360 degree audio/ visual sensory experience.” In addition, the tour will feature “the most elaborate production” they have done as of yet and various objects will be flying above the audience, including “real military drones.” Given the band’s reputation for putting on epic shows, this is a tour that no fan should miss out on.