Denver-based folk rock group The Lumineers headed back to their old haunt, New York City, to play "Stubborn Love" and "Submarines" on The Colbert Report last night. On both tracks, the band stuck to their straightforward, rootsy style. The first song of their set, "Stubborn Love," gallops along thanks to frontman Wesley Shultz's powerful voice and quick-paced guitar strumming. The band shifted gears with "Submarines," a melodic track featuring bouncy piano chords and plenty of staccato wallops from Jeremiah Fraites's bass drum. Colbert, as always, manages to slip in some good jokes as well. Check out the performance in the videos above.

Both "Stubborn Love" and "Submarines" are from The Lumineers' self-titled debut album, which came out in 2012 and is being re-released as a deluxe version on August 20th. The re-release comes with many bonus goodies, including 5 previously-unreleased tracks, a photo booklet, studio notes, and DVD with over 25 minutes of video footage of the band. You can pre-order the deluxe album now on The Lumineers' official website and on iTunes. 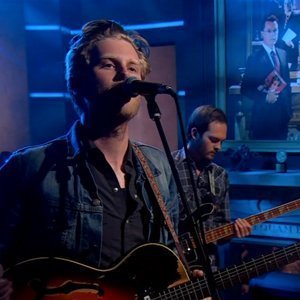