Warning, Green Day's 6th album, represents one of Green Day's most drastic stylistic departures. Whereas all of their previous albums had been straightforward punk rock focused on personal issues, Warning is folkier, more mature, and more socially conscious. More acoustic instrumentation is paired with lyrics discussing lessons learned and problems faced by society. Songs like "Macy's Day Parade" epitomize the new focus, as it describes commercialism and becoming a responsible adult. "Castaway" turns inward as a journey of self discovery, while "Church On Sunday" highlights relationships and working through difficult times, inspired by Billie Joe Armstrong's near divorce from his wife.

The album is among the most consistent thematically, but Green Day also made room for some experimentation. "Misery" is one of the most unique songs in the band's entire catalog, and a highlight on Warning. It features characters and a story-telling lyric, ideas that would be explored more on their next album. The first single, "Minority," introduced the topic of politics in the band's career, and it too would be explored more fully in the next record. Other highlights on the album include "Waiting," "Deadbeat Holiday," and the title track.

Warning was well received by critics, but album sales did not reflect similar reception, as it sold worse than the three prior records. Still, the album represents an important shift in Green Day's career, and laid the foundation that lead to their successful 2004 release, American Idiot. Warning showed a more mature, socially aware Green Day, and introduced a shift in lyrical and musical songwriting that would develop further in the coming years. 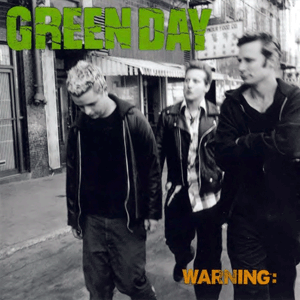 You can buy Warning on iTunes.

"Troubled Times" - Green Day [YouTube Lyric Video]
Music Pop Punk Pop Rock Green Day Berkeley, CA Lyrics Video
1
968
Back to top
You must be logged in to upvote.
Registration and login will only work if you allow cookies. Please check your settings and try again.