In addition to a slew of other guest appearances announced for the upcoming Queens Of The Stone Age album "...Like Clockwork," a press release has confirmed that Alex Turner will be appearing on the record. Also appearing are stars such as Dave Grohl, Joey Castillo, Jon Theodore, Sir Elton John, Mark Lanegan, Nick Oliveri, Trent Reznor, Jake Shears, and James Lavelle.

According to the press release, the album is currently slated for release sometime in June and the band will embark on a world tour "marking Queens Of The Stone Age's return to the stage for the first time since the limited dates that commemorated the 2011 re-release of the band's self-titled 1998 debut." The record was recorded by Mark Rankin at Pink Duck Studios in Burbank, and produced by Josh Homme and QOTSA.

Exact release and tour dates are still to come, so stay tuned here.

Read the full press release below. 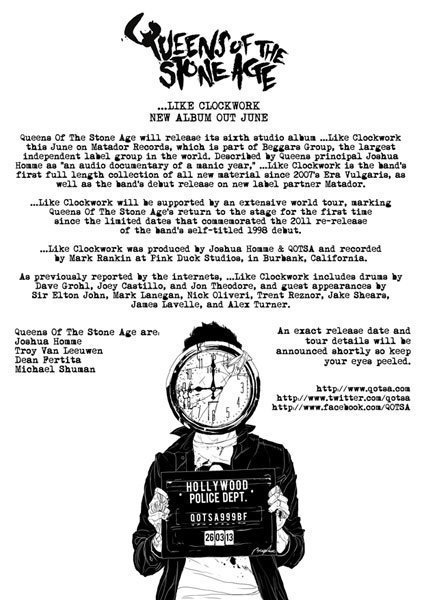