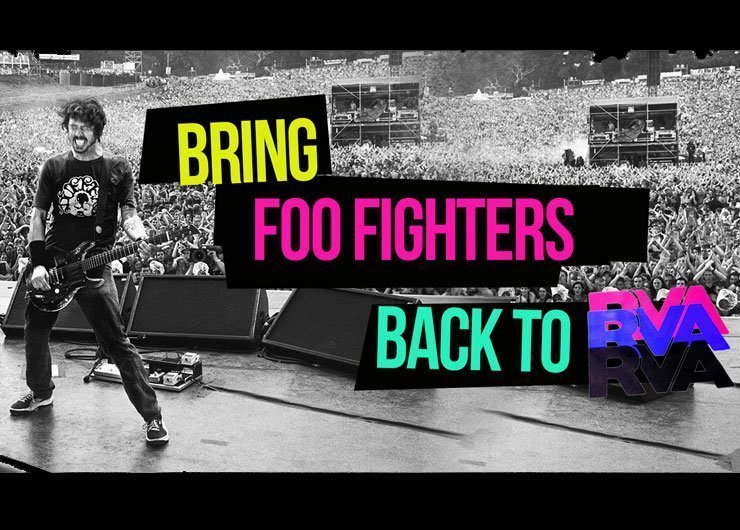 As if we needed further proof that Dave Grohl is a super awesome guy, Foo Fighters fans in Richmond, Virginia have crowdfunded a Foo Fighters concert that the band didn't even know they were going to play. Unbeknownst to the Foos, group of fans launched a Crowdhoster campaign to bring the band back to Richmond, which hasn't seen a Foo Fighters concert since 1998. When the campaign reached its goal of $70,000, the band confirmed via Twitter that they would indeed play the show.

Launched by Foo Fighters fan Andrew Goldin and his friends Brig White, John McAdorey and Lucas Krost, the campaign was based on trying to sell tickets in order to prove there was enough local interest in the show. The mission statement read:

Rather than waiting, and waiting and waiting for our favorite band to come to us, we're making it happen. We're selling tix to a Foo Fighters concert that the band doesn't have scheduled yet in the hopes that they'll come to our great city and play a show. Then if the band comes we all rock out. If they don't come, everyone gets their money back. Every cent. So buy your tix, spread the word, and let's make some rock-n-roll history.

In addition to the over 500 individual backers, two Richmond businesses also contributed to the campaign. Sugar Shack Donuts and Brown's Volkswagon each pledged $5,000, with plans to give the tickets away.

The actual date and location of the concert have yet to be determined, but stay tuned to Zumic as more details emerge. For more news, music, videos, and tour dates, check out the Foo Fighters' Zumic artist page.