Queens of the Stone Age dropped by Conan last night, October 30th, 2013, to perform "The Vampyre Of Time And Memory" from ...Like Clockwork. The performance saw frontman Josh Homme sitting behind a Steinway baby grand piano and belting out the tune. The band played a flawless version of the song, with stripped down guitar solos surging in and out between verses. Check out the video above.

Two days prior to the appearance, the band announced an interactive video for "The Vampyre Of Time And Memory" that was to be released the same day as the above performance, but the band released a statement on Facebook saying that the release was delayed:

The Vampyre of Time and Memory videos gonna be a bit delayed. See ya next week. Now go outside and scare someone. Happy Halloween!

Check back at Zumic to see the video when it's released. 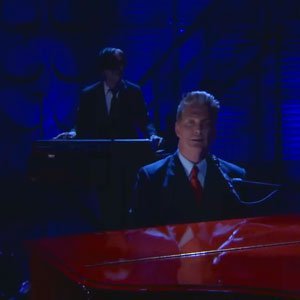 Queens of the Stone Age Add 2018 'Villains World Tour' Dates: Tic...
Tickets Metal Rock Queens of the Stone Age Royal Blood Wolf Alice Canada United States
1
1770
Back to top
You must be logged in to upvote things.
Registration and login will only work if you allow cookies. Please check your settings and try again.